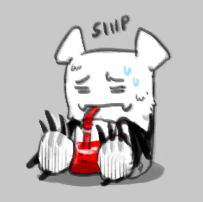 Dan Kim
over 1 year ago
Follow
cont'd
//////////////////
2/? At first I thought it was strange looking girl, but it is in fact a robot! She is more advanced than what we could normally make but she seems to move a bit stiff like she needs maintenance I can't give her.3/? That robot programming is set to clean and straiten up everything it comes across. This is causing confusion with my horns. They see a 'nohorn' yet it does not smell like one. The musclehorns can't scare it as it does not react to their threats.4/? The working horns love it because it does their work of cleaning and fixing things, yet hate it for trying to remove the cave moss on the floor. It even tried to clean the eggs in the nursery! It learned quickly what it is not allowed to do.5/? All I can get from it that is came from the moon and it can speak English. It was cleaning my house when it came to a stop and no longer reacted. It obviously ran out of power and while I tried to move it, I found a hidden compartment on her body.6/? I found a cord with what looks like a wall plug so I stuck it in a wall outlet. Lo and behold a charging display on her forehead appeared. it's been a full day now and she only gained 2% from an empty battery.7/7 I guess it'll wake up at 100% but that will take some time. Thankfully it's not sucking up a large amount of power, no more than a normal LED light bulb. I guess I have a new worker now. At least it doesn't need a bed or eat food.
///////////////Defectivehorn Apostle -- watch out!! You better search the area you found that robot and make sure there aren't any more around. One robot might be okay, but a large number can cause LIMITLESS destruction. There's a story on Big Egg about how one of the moons was polished TOTALLY SMOOTH to the point of being reflective by the long-eared bunnies that lived on that moon. I think there may be more to that story than meets the eye.Be careful, Defectivehorn Apostle!
1
0
Forward the question
❤️ Likes 🔥 Rewards
Follow