Anime and manga blogger, Genshiken specialist, lover of all foods ever
http://ogiuemaniax.com

June 05, 2016
One thing they have in common is that I think both characters are fantastic.I think it's not entirely clear if Koito avoids social contact out of fear of hurting others (unless I missed something while watching!), but her general reticence and the degree to which the show breaks down their facades is fairly Ogiue-esque.
1
0
Liked by: Halimun Muhammad
June 04, 2016
The show can be very hit or miss from episode to episode, but I appreciate the really obscure robot jokes.
0
0
September 09, 2015
I don't know if I have a favorite candy, but the first thing that popped into my mind was Crunchie: http://www.candyblog.net/blog/item/cadbury_crunchie
0
0
September 09, 2015
I would have a restaurant that served all different types of curry from around the world.
0
0
September 09, 2015
Because it's far more likely for me to find a Tim Horton's than speak with Tim Burton, I think Burton would take priority. If I got to speak with Tim Burton every day for some reason, things might change.
0
0
September 08, 2015
I think it suffers a bit from embodying philosophical concepts into characters (as most often people want a kind of realism to characters and representing a certain idea goes somewhat opposite that), but that it still does a good job of rendering them as "characters" nevertheless.
0
0
September 08, 2015
A lot of shows! I'm really enjoying My Love Story, Snow White with the Red Hair, Gatchaman Crowds Insight, and Aquarion Logos. Of these, Gatchaman Crowds Insight is probably my favorite. It's a super clever show and I'm impressed with how they've moved forward from Season 1.
1
0
May 21, 2015
I feel like it has so much more steam with so many little storylines to finish. I hope it runs for at least another 9 or 10 volumes, but I predict it'll be a little more like 4 or 5.
0
0
May 02, 2015
I've always been fond of the color purple, doubly so because of its association with the old Sega Saturn game NiGHTS into dreams (my favorite game ever).
0
0

This user hasn’t answered any questions yet
Ask @sdshamshel 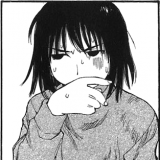