March 30, 2015
They were all good candidates. I think Annis should sound rougher though, and Enna should sound more grouchy and less refined -- like an old grandma who's seen it all and has had just about enough of your shit.
0
0
March 30, 2015
I watched both seasons! Nyaruko is the perfect waifu. Mahiro really should have given her a break.
0
0
March 29, 2015
Cakebutts, twintails, tomboys, christmas cake OLs, heart-shaped pupils, melty-mouth, ZR, capes and capehugs, comfy and bug eyebrows -- actually, if I draw it, just assume it's in my strike zone. You'll be right 99% of the time.
0
0 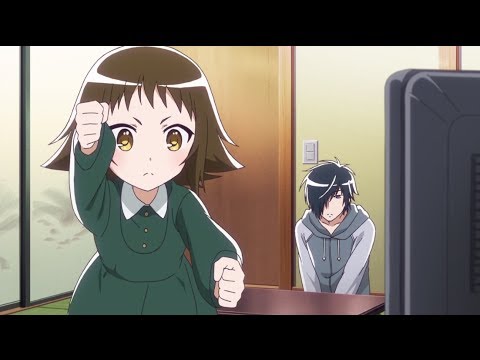 Vicky sounds like a tired, worn out tomboy with a surprisingly girlish laugh.The bat has a pokemon-like voice. Bweh!Annis is a yankee.Enna sounds annoyed/exasperated/irritated at all times.Algis is ufufufufu~Smoking templar sounds like she's in on a joke and the joke is you. Fuuu~
0
0
March 29, 2015
T-that won't happen bweh!
I'm gonna take tiny little sips bweh!! IT'LL BE OKAY BWEH!!!
1
0
Liked by: Evil Steve
March 29, 2015
Bosses can be parried -- and from quite a distance!
Parry, take two or three forward hops to rapidly close the gap, the riposte like a muhfugga.Also remember that backstep is beststep! Unlike Dark Souls, where rolling into the the attack is always the best move, Bloodborne bosses tend to have long chain attacks with large areas of effect, so backstepping to get entirely out of range and then pressing R1 for a dash attack (or parrying) is almost always better.
0
0
March 29, 2015
>tfw my a cutest looks like a rainbow sprinkle donut.... ... Get in the car, my a cutest. It's time for a little visit to the clinic.
2
0
Liked by: Nubum Hebiko (蛇子)
March 29, 2015
Happy Horns! Happy Herd!
1
0
Liked by: Nubum
March 29, 2015
Typically I work form a single striking image and build a world out from there. If there isn't a picture in my head that really grips me, I don't pursue the idea very far. For Paper Eleven, it was this injured girl in a windy, overexposed, open landscape with incredibly tall wind turbines... walking through a dark tunnel... her tie and jacket flapping around in the wind...For NNN it was that fire snake in the mountain... and the white rabbit, trapped in a too mundane life..Vampire Bride had a lot of false starts but the image that stuck was the one on page 2 -- Bikky and the Bat all comfy in bed while the stars go out one by one outside... warm and comfy inside, freezing and brutal outside... From there everything else slowly came together -- the witches, the himehorns, the other templar, snowhorn, etc.

0
0
March 29, 2015
1
0
Liked by: Magical Minty
March 29, 2015
Sure did! I still remember doing the last 7 or so strips in a single sitting. It was pretty intense. I was crying real tears!
0
0
March 29, 2015
Slight backtracking is possible, but in general you'll be added to the map immediately and your order in the queue will be determined by your geographical location and the direction of movement. Worst case, the bat will visit you on the second loop around the world.
0
0
March 29, 2015
Banehorn would have to jump to reach Leedah's knees.
So easy. So simple.
0
0
March 29, 2015
I think we all know who's really in the driver's seat.VROOM VROOM
BIKKYMOBILE!
YOU'RE MY HERETICAR NOW!
3
0
Liked by: Leedah The Late Wendy Cooldown Artemi
March 29, 2015
It's alright. I don't really like it when some cat-ear wearing 14 year old in rainbow arm warmers asks to be drawn as a chibi at a con, though. Actually, all forms of "please draw me!" really rub me the wrong way -- too Cupcake.
2
0
Liked by: Nubum
March 29, 2015
I always think about Sharon Apple from Macross. I can't believe I lived long enough to see stuff like this become a reality:https://www.youtube.com/watch?v=7NnR5tvxaRo

I love it.
0
0
March 28, 2015
Kafka's shortest pieces have a special place in my heart. "The Vulture" and "The Bucket Rider" are my favourites. I like extremely dense fable-like visions that sacrifice nothing.
0
0
March 28, 2015
Yup! But if you're happy with your current desktop and don't need the portability, consider a 13HD Touch. I like writing in bed moving back and forth between the desk and couch (and working on the train) so I popped for the extra.
0
0
March 28, 2015
I splurged and got myself a Cintiq Companion (version 1). It's a very nice machine. I can draw comfortably anywhere now and even write notes in bed. It's paradise!
0
0
March 27, 2015
Haven't seen it. The girls seem cute. ;w;
0
0
March 27, 2015
I enjoy both together. I wouldn't really enjoy either one separately.When it comes to writing, I enjoy the "vision" (world, atmosphere, the experience/dream of the thing, etc.) more than the plot or character development.When it comes to drawing, again, I enjoy the play of imagination more than technical prowess.
1
0
Liked by: Evil Steve
March 27, 2015
I had to google that. No feelings one way or the other.
0
0
March 27, 2015
Stop right there, heretic scum!
0
0
March 26, 2015
=w≠ bwuh?
0
0